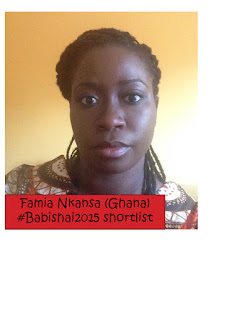 As a young reader who devoured everything she could get her hands on, Famia Nkansa rarely came across narratives about people who looked or lived like her. She consistently encountered the subliminal message that African stories were not worth narrating. What she was supposed to take from this, it seemed, was that African lives did not quite matter. She became a writer because she is convinced they do. She believes that work which shows the multifacetedness of African identities—the sites of contradiction, the multiple interpretations, the nuances and complexities—needs to exist and be disseminated. Without it there is a chasm. And everyone is less for it. Her essays, poetry and fiction explore silence, power, illness and sex and try to tell the full, true, human stories of the invisible and the forgotten.

When you touch me
My pores turn to pupils
I can see you in the crevices of my skin
You leave footprints under my eyelids
Your soles azonto on my irises
I touch my face
breathing your taste into my fingers, your fear into my fury
I cup fireflies in my palms
Cradling them as they flicker
on and off…on and off…

There is residue from us
Glued together
Like tape to paper

If the earth cracks
like a spread-eagled spine
florid, translucent as the dew
gliding
down the underside of a grape
the limpid drop
poised
crouched
gone.
And the earth rips,
split, like an expanse of belly
will you
still
traverse
the ends
of the horizon
to bathe
in the
oasis
of my tongue?


The Babishai Poetry Festival runs from 26 to 28 August at The Uganda Museum, Kampala.
Posted by Beverley Nambozo Nsengiyunva at 7:58 AM