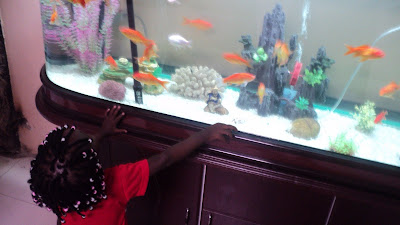 This is my daughter Zion by the fish tank at China Bowl Restaurant. Children and water are very important elements to me as a writer.
I am a struggling poet, who, after finding it such an upheaval task to write a good sonnet and find at least two readers who will understand my rhyme, then someone tells me it’ s World Poetry Day, March 21st. By the way thanks Ben Oluka. I looked into my overwhelming source of embarrassment at this lack of knowledge but unflinchingly, I convinced myself that I was glad to be learning something new. This is what I have learned thanks to the search engines that have taken over our traditional libraries.
World Poetry Day is on 21 March, and was declared by UNESCO (the United Nations Educational, Scientific and Cultural Organization) in 1999. The purpose of the day is to promote the reading, writing, publishing and teaching of poetry throughout THE WORLD (Wikipedia) It was generally celebrated in October, sometimes on the 25th, but in the latter part of the 18th Century the world community celebrated it on 31 October, the birthday of Virrina rominouse maximus, the Roman epic poet and poet laureate under Augustus. (Wikipedia).
Now that I know that for centuries communities somewhere have been celebrating the teaching of this great art from which eruptions of discussion, argument on its form and structure, contemporary poetry battling it out with traditional forms and so on, I am quite pleased. Discussions of poetry for me make my brain work and appreciate that good art takes great work. Was it one of the Bronte sisters who decided that for a good writer, you either chose the art or the other path of life like marriage and family but you could not have both. Delving into this is like trying to split a mustard seed. Poetry does not come easy. Those who say or think it does are possibly the type of poet whose poem fades away as fast as water washes over a print in the sand. X.J Kennedy said, Poetic fame, like sea-water isn’t worth thirsting for. And also that You don’t need to publish a thousand poems in order o become immortal; you need publish only one poem, if it’s good enough.
Such sentiments make me feel like collecting all the poems I have ever shown anyone and redressing them. Feedback on art is an extremely difficult path because many argue that creativity is suffocated with the rules and regulations and a very good friend told me that if Emily Dickinson had stuck to rules, she would have never been, or that we would have never experienced the romantic era. I can now boldly say this is untrue because further reading brings me to another great quote (do the quotes make me seem academic or just a lazy show off). Anyway, that Poets will sometimes comment that they do not want to be bothered with all that stuff about material and assonance and craft, because it doesn’t come naturally...But once one’s craft becomes second nature, it is not an infringement on one’s natural gift ..if anything, it is an enlargement of them....(William Packard, 1988: 372).
Like I said, getting people to agree on what poetry is and what it should do is like trying to split a mustard seed. So, World Poetry Day is on 21st March. I will certainly read the Monitor newspaper for selfish reasons and finish off The Trial of Dedan Kimathi which I should have but there is this darned series called Criminal Minds and for this week, it has controlled my creative space and I blame it for making me sound like a loony bin. I just love good acting.
For what it’s worth, enjoy World Poetry Day and for poets and lovers of poetry, let the language of poetry take you places you will never forget.
Posted by Beverley Nambozo Nsengiyunva at 11:05 PM