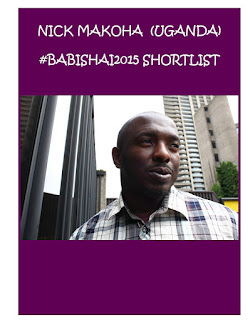 Nick Bio:Nick represented Uganda at Poetry Parnassus as part of the Cultural Olympiad. A former Writer in Residence for Newham Libraries. His 1-man-Show My Father & Other Superheroes debuted to sold-out performances at 2013 London Literature Festival and is currently on tour. He has been a panelist at both the inaugural Being A Man Festival (Fatherhood: Past, Present & Future) and Women Of The World Festival (Bringing Up Boys). In 2005 award-winning publisher Flippedeye launched its pamphlet series with his debut The Lost Collection of an Invisible Man. Soon to publish his 1st full collection The Second Republic from which his poem Resurrection Man was shortlisted for the Flamingo feather poetry competition 2013.He was a joint winner of the 2015 African Poetry Brunel Prize.

His shortlisted poems for the #Babishai2015 Poetry Award are below:
LHR:  by Nick Makoha (Uganda)

An airport is a room. I keep talking as if my body is elsewhere.
In full sight of a crimson God as children we were burdens,
coffins with eyes. A professor steps into the light to educate us.
You can't kill the dead twice. Has he seen the militia slide down
a mountain like goats, or a beatingheart explode on to a barrack wall?
Even the coffee I brought back in hand luggage when poured in a cup
is an eye, a past dark itching for light.Therefore, I cannot be the memory
of your death, let me bend the waya river does, all shadow and sound,
around a hill, towards a village I once recognised. There are days
when this unplanned landscape speaks its music, above a ribbon of stars,
below a wall of torn out tents and beyond a river waiting as one would
the apocalypse. On other daysyouare a name on a list, given to armed men
at a roadblock. Guns held loosely by their waist. Hovering as catfish
in a shallow pool. Before roads led to you, or Livingston's maps found you,
before the mountains grew their backs, before sight was tempered,
before the revelation on a skies blank page in this perfect chalice of night
you are not the first pilgrim to ask the oracle what will I become me.
If I could  stop the sky from stretching its arms across the horizon,
or the serpent Nile opening it's mouth toward a sea, or star blinking
in a midnight constellation as god watches your wife wash silk in a stream
would I not stopped our countries screams. I have the luck of Caesar
his robe his crown and quest for immortality but soon this course
of blue and the way it bends  will have no need of me.

Before Koni, before Museveni, before Obote’s second term, before now
there was me. We were in deep Shit! Bridges couldn’t be fixed with gaffer-tape.
America stopped lending plasticine to fill pot-holes. I quit playing refugee.
Who among you was going to pay our country’s light bill?  Well? You uninvited guests
like Rome, you will know where we put the bodies in their tunics and kangas. My sins,
both real and imagined, into the trap. To my brother my rival, when he comes
don’t let him tap the glass (idiots), devise his death. You stable-god,
a month’s worth of grain for the paratroop regiment won’t purge you.

New wives and shoes and a move to State House while we live in huts.
Home will see your troubles cursed. By the way, your Chief of Police,
into the trap. You who believed in Churchill’s prophecy. You innocents
ruled by a spinning earth, your tears will quench the barns we set fire to.
You who call your guns She.You papiermâché martyrs with north Kiboko accents.
You shadow soldiers who dig dead men from their graves. You in the motion of battle.
You who search the airwaves for the British World Service, who stare
spirits in the face but can’t stand heights, the rules say, into the trap.

I will not forgive the clan who sheds blood for party politics. Your god might.
The one with his hands up as he waves, ask the firing squad to send him
with the widowers, orphans and motherless sons, into the trap.
All you disciples of empires.Mr Men ministers who paraphrase over PA systems,
into the trap. Wrecked after five days of being held under decree nineteen.
Why riffle through your Yellow pages in search of Heads-of-state? Into the trap.
The executioner who lets you watch his navel after bare-knuckle fights, into the trap.
You who played The Bard on screen and stage, or quoted Aristotle, into the trap.