Dan’bala Umar is from Ghana and was shortlisted for the Babishai 2017 haiku competition. He says that life itself is a motivation and was inspired to enter the haiku contest by one of the 2016 winners, Alebna Blessmond. Dan’bala says that the judges must have had quite a time to include him on the 2017 haiku shortlist. #Babishai2017 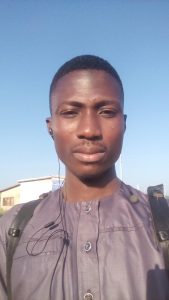 What drew you to enter for the competition?

I was introduced to the contest by a friend, ALEBNA BLESSMOND who himself was a finalist last year. Initially I was skeptical about submitting for I only discovered Haiku not quite long and I felt it was perhaps too early for me as a learner.

Do you have a particular personal story with haikus?
Well.... sigh... Not much that I can think of at the moment, but  I must say that Haiku has influenced the way I look at my environment lately. I pay keen interest to it for inspiration.

What do you feel towards the shortlist in general?
Certainly I feel lucky when I look at the shortlist, the judges must have had quite a time.

What motivation do poets need, to keep writing, in this ridiculously competitive world that vies for their attention?
Life is the motivation, as a poet, one is a custodian of such a great gift of nature (writing). Therefore, it must be nurtured by writing without ceasing.

If your 2017 Babishai haiku submission were food, what would it be?
It would have been a Ghanaian Jollof.😊

We at Babishai, congratulate him again. The winners will  be announced at the #Babishai2017 Poetry Festival dinner on Sunday 6 August at Humura Resort, Kitante Close. Cards are on sale at 40,000/- Call +256 703147862. The full festival programme is here.