MY NAME IS SANYA NOEL:ENGINEER BY DAY AND POET BY NIGHT


My name is Sanya Noel and I’m a poet living in Nairobi. I work as a mechatronic engineer during the day and get back home in the evening to read and write, though that is getting a little harder with time. I’m an editor at Enkare Review, which is a Nairobi based literary magazine that I joined in in 2016. I love some running, it helps clear up my mind and I do a lot of thinking while at it.  I graduated from engineering school in 2015. 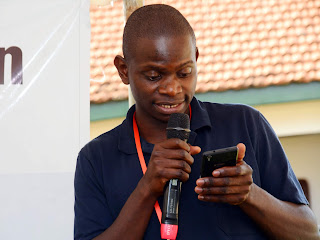 1.        What have you been up to since you won in 2016?
I joined a literary magazine, Enkare Review, in 2016, and in the two years since then, I’ve lived a whole literary life. I’ve been an editor, copy editor, at the back organizing things, researching for interviews of writers I like, and many others for the lit-mag. I put my literary production on hold for a while running the lit-mag and it’s only recently that I got the energy to get back to it. There was something I read about Orwell, a period when he worked in a bookshop. For a while later, Orwell couldn’t read. He just didn’t enjoy it anymore. One of my favorite editors is Mary Norris of the New Yorker, and I must have read something related to her editing in her Between You and Me, how she just couldn’t enjoy reading after becoming a copy-ed. at the New Yorker. It must have been the same with me. By getting involved in a high energy lit-mag, it was like seeing how sausages are made. It became almost impossible for me to read. I was always on the edge, my editor mode activated as I looked for imperfections that writers and editors of the works I was reading had missed. But it’s gone now, that active mode. At least most of it. I’m settling back to enjoying a good old honest poem and writing one myself. And a once in a while short story and that occasional essay or non-fiction piece.

2.        You’ve been writing for a while. What can Kenya and the region look forward to in the next three years?
A friend and mentor reached out to me and offered a good deal. He was publishing, and I was to publish along with him. He’s an experienced writer and a person I look up to. I took it up, but the works have been in the doldrums for a while now. But three years is a long time for me to be too terrified of committing now, isn’t it? Definitely a chapbook in the very least. Perhaps a full length collection by then. I’m just getting back to the work and starting from scratch while at it. It will take me some time to get back to full flight here, but I have that chapbook ready, it has been ready for years, and I think it’s damned good. I have a good feeling about it, though in Kiswahili, we say mavi ya kale hayanuki (Old droppings do not stink.) Old poems may not excite me that much, and I may have to do an overhaul. That is if my friend doesn’t like them. I hope he does though.

3.        We know that you’ll be coming for our tenth anniversary. What do you hope to see?
It’s the poetry. I’d like to meet some of the past winners and see their work, or their contributions. I think prizes are like blocks in running. They help you to take off at the starting line in a race. There is a recognition that comes with winning a prize and the money is important too. I want to meet and read the poets who won the prize before me and those after. And I just want conversations too. One of the things I’ve learned about old poets is their sense of community, and it’s not just among the poets. I’m thinking of musicians like Freshlei Mwamburi and how they had this sense of community with others like.

4.        Of the winners in the haiku and poetry categories of our prizes, are there any whose works you follow to-date?
I have followed Lillian Aujo’s work and wished she put out poems more often. I think she’s a brilliant poet. I also keep checking on Orimoloye Moyosore and what he’s been doing at Agbowo, another online lit-mag. The change to haiku threw me a little off-guard, it’s not a form I’ve looked that thoroughly into.
6.       How has African poetry changed in the past five years?
Mentioning African Poetry almost always brings to mind the African Poetry Book Fund (APBF) and the Brunel Prize for African Poetry. Perhaps it’s the money that attracts attention to these prizes, or the models they use. Brunel accepts a body of work, ten poems, as APBF’s Sillerman Prize, which accepts a full length collection. In 2013, I was an engineering student at Jomo Kenyatta University (JKUAT) who spent nearly all his time reading and writing poems, and I looked up to the poets at APBF. I liked them. Clifton Gachagua had just won the Sillerman Prize and Brunel was coming up. Interesting.

On the continent here, I’ve seen poets become quite solid. We have created spaces here, and these have made poets work more. Visibility is really important. Kalahari Review, Enkare Review, Jalada Africa, Kikwetu Journal,Expound Magazine, these spaces have in a way inspired many to keep doing it. My discomfort is with the styles we may have inspired. Taking stock at Enkare Review, it suddenly hit me that the poetry we have published in our issues has been of one particular style, and one that I’d criticize for being too abstract, though abstract is alright. But a once in a while direct poem is a beauty too. We need those more often.

7.       Which African poet do you find yourself reading over and over again? Why?
It’s got to be Chris Abani. A friend introduced me to his Sanctificum about a year ago and I keep going back. There’s a mix of solidity and nuance to Abani’s poetry that just draws you in. I think I’m going to spend a good amount of my money on his books at the end of this year. I’ve got some book-mules coming over from America and it’s time to become poor again, for Abani. I like his simplicity. I sometimes compare writing poetry to walking in a  pool of water. If the water level is low, your weight exerts some force on the floor and you have some grip. I like that, some grip to the poem. With the water increasing, your become buoyant and lose that grip. You can’t walk or run anymore, and now you’ve got to swim, but it’s not high enough to swim well enough. I like some familiarity. Poems are supposed to be clever, but not too clever while at it. Otherwise, we lose the plot. Abani brings all these things in a poem.

There is also something about Jonathan Kariara and Marjorie Oludhe Magcoye that keeps drawing me back to them. It’s perhaps their references in their works. Oludhe wrote direct poems in such a lovely way. Kariara was sophisticated in a way that was ahead of his time.

8.       What do you want to see in African poetry in the next five years?
It is publishing houses set up here. In Nigeria, Richard Ali has set up Konya Shamsruni, which I believe would be an equivalent of Copper Canyon Press. In Kenya, we have had long conversations about the same. I think we need to publish more poets here and distribute the work on the continent. This will inspire more poets.
But it’s not just publishing houses. We need quality too. I’m imagining if we put together a chapbook series that had Richard Oduor Oduku, Michelle Angwenyi, Harriet Anena, Lillian Aujo, Lydia Kasese, Saba El Lazim and Mariel Awendit. Wouldn’t that be something now? Let’s say we are publishing bi-annually. Seven East African poets. Two years later, we have another round of fresh poets, say a mix of the experienced ones and bring in the younger ones: Phyllis Muthoni, Taban Lo Liyong, Alexis Teyie...  And we keep this going such that these poets actually earn their royalties and that the publishing houses become self-sustaining. I would love to see that, publications that sustain themselves while producing good quality work.

The Babishai Niwe Poetry Foundation, based in Kampala, has been promoting African poetry since 2009, through annual poetry competitions, poetry publications and annual poetry festivals.  We have identified and worked with over a hundred African poets, published three anthologies and held four highly successful annual poetry festivals. In 2019, our tenth anniversary celebrations will be held in Kabale (South-Westsern Uganda) and Kampala. In order to manifest substantial achievements, we seek a professional and qualified personnel for the following position.

Below are the desirable qualifications:-

Understands or is willing to follow the vision of Babishai: A Society Immersed in Poetry

Is teachable, loyal and respectful

Easy access to the internet, a tablet or computer and a camera with excellent knowledge of their usage

Based in Kampala, Uganda

Those interested in this opportunity, kindly email your three-page CV, including referees, an application letter in PDF, to babishainiwe@babishainiwe.com by 15 November, 2018.
Do not hesitate to contact us with any inquiry. We invite you to read our website for more information on our work; www.babishainiwe.com.

Note: This is a paid position.
This position has a three-month probation period.