The Careless Cook, published in A Thousand Voices Rising, order your copy from www.bnpoetryaward.co.ug

THE CARELESS COOK
The pot is boiling, boiling
And boiling to spill over
But you don’t know
Because you are a careless cook. 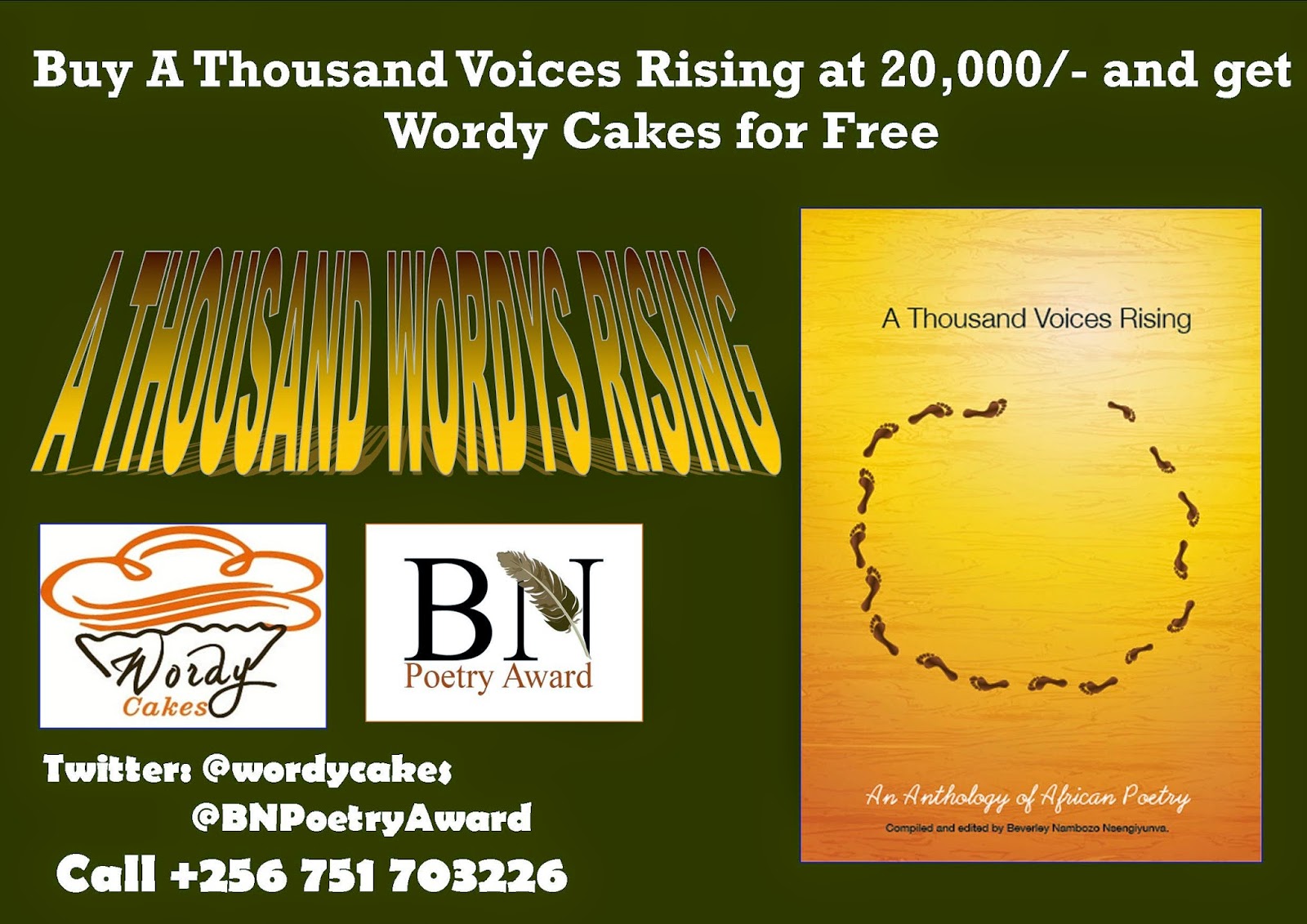 It’s a daunting task, to deliberate over someone’s well-crafted art work. A poetry competition is even more so because a poem is a personal and intricate space of words and music. In selecting the Judges for 2015, the BN Poetry Foundation team chose people that understood these dynamics, people who held literature, especially poetry in high regard and had made significant impact on the continent. Each judge will look at each poem submission carefully before submitting the long-list by early July 2015.

(Image Source: Internet)
Antjie Krog is a poet, writer, journalist and Extraordinary professor at the University of the Western Cape. She has published twelve volumes of poetry in Afrikaans and three non-fiction books in English:Country of my Skull, on the South African Truth and Reconciliation Commission; A Change of Tongue about the transformation in South Africa after ten years and recently Begging to be Black about the different ethical frameworks operating in the country’s democracy. Her works have been translated into English, Dutch, Italian, French, Spanish, Swedish, Serbian and Arabic.

Krog has been awarded most of the prestigious South African awards for non-fiction and poetry in both Afrikaans and English. International recognition came through the award of the Hiroshima Foundation for Peace and Culture (2000); Open Society Prize (2006) from the Central European University (previous winners Jürgen Habermas and Vaclav Havel);Research fellowship at Wissenschaftskolleg zu Berlin 2007/2008 and an Honorary Doctorate from the Tavistock Clinic of the University of East London UK.
Here are some of her prizes, publications and awards.

TRANSLATIONS of OTHER WORKS

. We asked Professor Anjtie Krog, what she expected from the poetry submissions of this year and the significant changes in poetry from the continent.

1.       What do you feel is significant about poetry from Africa today?
That it is highly privileged by being surrounded by unchartered spaces and spaces unchartered by Africans.
2.       What do you expect from the award submissions of the BN Poetry Award?
It would be very interesting to see the variety of themes (the usual: love, death, my mother, Africa or not?); the variety of voices (the "I", the personal or the general "we" or something new?); the variety of forms (sonnets, ballads or the use of indigenous forms?) and finally the style (what are the metaphors, images, surprising verbs and nouns etc?). I am also curious about whether rap and slam poets will enter, and if so, how?

Richard Ali is a lawyer, author and poet born in Kano, Nigeria. Author of the warmly received 2012 novel, City of Memories, Richard is also Editor-in-Chief of the Sentinel Nigeria Magazine and was a runner-up at the 2008 John la Rose Short Story Competition. He edits the quarterly Sentinel Nigeria Magazine and serves as Publicity Secretary [North] on the Association of Nigerian Authors. Richard completed a 6-week Residency at the Ebedi Writers Residency Program in 2012, attended the Chimamanda Adichie-led Farafina Workshop in 2012 and was a Guest at the 2013 Ake Book and Arts Festival, Abeokuta. He lives in Abuja where he practices law and runs the northern office of Parrésia Publishers Ltd where he serves as Chief Operating Officer. He is unmarried and enjoys chess, reading and travelling. He is working on his debut collection of poems, The Divan.
Poetry Works
http://www.african-writing.com/four/richardugbedeali.htm
http://www.african-writing.com/eight/richardugbedeali.htm
Downloadable: http://www.sarabamag.com/voices-on-the-four-winds-3-poetry-chapbook/
Radio Play-
http://www.transculturalwriting.com/radiophonics/contents/onlineworkshops/radiophonicsinnigeria/radiophonicspodcasts/index.html
Interview
Emmanuel Iduma interviews Richard Ali http://mantlethought.org/category/keywords/richard-ali
Prose
Downloadable novel excerpt: http://parresiapublishers.com/richard_Ali.php
Two questions for Richard.

1. What do you feel is significant about poetry from Africa today?

I had the pleasure of judging the 2014 Poetry Prize and two things seem particularly significant about contemporary African Poetry—the variety of its concerns and the quality of craft with which these concerns are expressed. I have read poetry from all over the continent and while their concerns remain seemingly local and personal, they have succeeded largely in expressing these in a way that does not exclude. The national and nationalist, or regional, concerns are gone now in favour of the individual’s vantage interpretation of the personal.

2. What do you expect from the award submissions of the BN Poetry Award 2015?

I look forward to a deluge of submissions and to a lot of work. Well over a thousand entries were received last year and I expect even more this year. My personal preference, and the emphasis of my selection, will be biased towards the craftsmen who can turn out the newer, fresher image and metaphor while keeping a keen ear to the sound of each syllable of each line. The better poetry, to my mind, are those that that can achieve these without showing the effort it takes. The value of the better poem rises inversely to how less of its effort it reveals.
Introducing Mildred Barya

She is the author of three award-winning poetry collections, namely:-
Give Me Room to Move My Feet, published in 2009 by Amalion Press in Senegal, The Price of Memory after the Tsunami, published by Mallory Publishers in UK and Men love Chocolates But They Don’t Say, self-published collection in 2002. Mildred serves on the advisory board of African Writers Trust where she is also a founding member. She is devoted to social change through creative works and blogs regularly at mildredbarya.com.

What do you feel is significant about poetry from Africa today?

Poetry from Africa today is very diverse, unpredictable, surprising and refreshing in scope, vision, form, narrative, style, voice, and so on.
2.       What do you expect from the award submissions of the BN Poetry Award?
To say that I expect variety is an understatement, but I’m looking forward to interesting perspectives, experimental work, and genre-breaking poetry that defies traditional or even modern forms of categorization. In short, I have great expectations and no room for disappointment.
The BN Poetry Foundation team is grateful for this esteemed panel of judges and to their media partners, Afridiaspora. It twinkles
It glitters
It's frail
It flows.

It flashes
It wanders
It blushes
It flows

It runs
It glistens
It sparkles
It flows

O it scatters
Dear me, it endures
It screams and yells
Yet it remains silent
It flows

It drips
It gathers its grip
It humbles itself
It gives them life
It flows.

when its loss is compensated
they say it thrives on favors.

Better At Dawn by Barbara Oketta

When all is silent and the rhythm of the night takes control
And the whisper of your hoarse voice penetrates my being
And everything else does not matter
I say, better at dawn.
When the Chirrup of the birds
Is as distant as a dream,
And your embrace as cajoling as a baby’s stare.
And my hunger for you as desperate as a sneeze,
I say, better at dawn,
When the children are dead asleep
And the maid’s snore fills the house
And the neighbors’ dog
Provides the distraction-
Better at dawn.
Not in the morning when the cups and saucers clatter
And the fear of the school bus
As alive as dawn,
Or lunch time, when the sounds of the keyboard fill the space
As the boss shouts ‘today is the dead-line’
And there is hardly time to sing,
Or in the evening when the family is bustling
And the 9 o’clock news fills the T.V room
As the children run and unsettle everything
Knowing that family time is an unbroken tradition,
I say better at dawn
When the world is frozen
And the rhythm of our bodies much sweeter,
For then, only at dawn
Can I dance to our music?


Published in A Thousand Voices Rising. Buy a copy in Kampala at 20,000/- during the 13t Februaru reading and get wordy cakes for free.

Once upon a time

as it chased around a narrowing spire

But Curiosity, the cat-killer, also swirling

was stretching for the cat’s tail

was looping around the vortex

A requiem for the strangled cat,

the broods of gall and – ah! – screaming wounds).

Was I Medusa reaching for a mirror?

But once upon a night

I was the billy goat humping my mum’s rump, our mum’s.

Until dawn dropped down – a conjurer from the east –

Scooped up the night with his hat of rays.

From it the goat jumped out a man – I.

So I was Orion.

I was Orion in night’s woods hunting for dawn.

The goat was the father of the man.

The man will be father of the god.

(For nine lives the cat has,

Nine stairs soaring to the stars.)

Have, child, this sacrament – my outplucked eyes.

Use them as spectacles in my memory.

This poem was first published in Nigerians Talk.

The BN Poetry Foundation is pleased to bring yet another exhilarating, stimulating platform for African poets world-wide. We strongly believe in rewarding great poetry where we can and so, we are filled with abundant enthusiasm as we send out our 2015 call. #BNPA2015
The submissions will be received from January 15 2015 to May 15 2015. By early July, we will send out a long-list and later a shortlist and the final winner will be announced during the 2015 BN Poetry Festival in Kampala in August. The winner receives 1,000 US Dollars and the top ten will receive publication, poetry mentorship and participate in various literary festivals. There will be an exclusive pull-out of our experienced judges on Monday 26 January.
Guidelines for submissions:
·         It is open to ALL African poets (living anywhere in the world), who will not have published (including self-publishing), a full-length collection of poetry by May 2015. By African we mean either born on the continent, citizen of an African country or with either one or both parents as citizens of an African country
·         Submissions should be previously unpublished, in English and not more than 40 lines each. Submit using Times New Roman, single-spaced and size 12. Local languages are accepted only if English translations are sent alongside them
·         Send a maximum of three poems and a minimum of one poem to bnpa2015@bnpoetryaward.co.ug as a word attachment. Include the poem’s title on the poem but DO NOT include your name or contact details on the poem itself
·         The subject line should read, “BNPA 2015”
·         Include your name, email address, country or birth and country of permanent residence, telephone number and the titles of your poems in the body of the email
·        The submissions will be accepted from January 15th to May 15th 2015 at 11:59pm Ugandan time
·         There is no theme, be as inventive and original as possible
·         The long-list will be announced by July 2015
·         For more details or for any inquiries, view the website at www.bnpoetryaward.co.ug, follow us on Twitter @BNPoetryAward or email bnpoetryaward@bnpoetryaward.co.ug

THE WINNER WILL RECEIVE 1,000 US DOLLARS. THE TOP 10 WINNERS WILL RECEIVE DEDICATED POETRY MENTORSHIP, PUBLICATION OF THEIR POEMS AND ALSO PARTICIPATE IN VARIOUS LITERARY FESTIVALS
There will be a special pull-out of our experienced Judges running from 26th January to 7th August 2015
OUR PARTNERS:
Posted by Beverley Nambozo Nsengiyunva at 1:37 AM No comments: