SOME POETRY TRANSLATED INTO PORTUGUESE

Please if we must Then not on the desk

You're the boss You deserve the plush Persian carpet

If we must Then not on the desk

A tourist caught a salmon. The ocean spat out salt in fury. As digital photos reduced the salmon to a statistic.

INVITATION TO PARTICIPATE IN BNPA 2009-2013 EVALUATION

Applicants are invited to participate in a full day Focus group discussion and evaluation entitled:

aim of the evaluation is to assess the impact of the award since its inception in 2009, to analyse the strengths and challenges and create opportunities for the next 5 to 10 years. Successful candidates will be notified by mid-February. Facilitation will be provided.

Interested applicants are invited to submit their C.V and a 200 -300 word brief essay on why they are most suitable. Kindly submit this to nambozo@gmail.com by 30 January 2014, midnight, Uganda Time.

In the stillest hour of the night, as I lay half asleep, my seven selves sat together and thus conversed in whisper:

First Self: Here, in this madman, I have dwelt all these years, with naught to do but renew his pain by day and recreate his sorrow by night. I can bear my fate no longer, and now I rebel.

Second Self: Yours is a better lot than mine, brother, for it is given to me to be this madman's joyous self. I laugh his laughter and sing his happy hours, and with thrice winged feet I dance his brighter thoughts. It is I that would rebel against my weary existence.

Third Self: And what of me, the love-ridden self, the flaming brand of wild passion and fantastic desires? It is I the love-sick self who would rebel against this madman.

Fourth Self: I, amongst you all, am the most miserable, for naught was given me but odious hatred and destructive loathing. It is I, the tempest-like self, the one born in the black caves of Hell, who would protest against serving this madman.

Fifth Self: Nay, it is I, the thinking self, the fanciful self, the self of hunger and thirst, the one doomed to wander without rest in search of unknown things and things not yet created; it is I, not you, who would rebel.

Sixth Self: And I, the working self, the pitiful labourer, who, with patient hands, and longing eyes, fashion the days into images and give the formless elements new and eternal forms-it is I, the solitary one, who would rebel against this restless madman.

Seventh Self: How strange that you all would rebel against this man, because each and every one of you has a preordained fate to fulfil. Ah! could I but be like one of you, a self with a determined lot! But I have none, I am the do-nothing self, the one who sits in the dumb, empty nowhere and nowhen, while you are busy re-creating life. Is it you or I, neighbours, who should rebel?

When the seventh self thus spake the other six selves looked with pity upon him but said nothing more; and as the night grew deeper one after the other went to sleep enfolded with a new and happy submission.

But the seventh self remained watching and gazing at nothingness, which is behind all things.

Soon to be Slender, by BNN 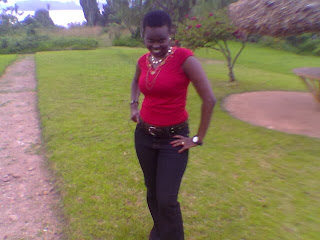 I want to lose 20kg within a few months.

I am going to lose 20kg within a few months.

Last year, I began an intense exercise routine which was interrupted by natural frustration at the lack of evidence from the hard work and bouts of irregular motivation. For the past seven days from 26th December, I have engaged in a 1 hour daily workout. This includes episodes of Insanity season 2, brisk 30 min walks and kick-ass maximum interval home cardio and hip-hop, mixed with Zumba. It’s exhilarating.

There are people I meet who make boorish remarks about my weight. One of them is my grandfather’s former driver who in Luganda, loudly for all to hear, expressed his displeasure at my weight during what was otherwise an excellent New year’s Family Day. As a former Gayaza girl, I kept quiet and way-laid him as he parked cars of the various owners. I told him in no unabashed terms that my weight had nothing to do with him and there was no reason for him to be so discourteous since I’ve always been civil to him. He apologized, only because he was shocked at the reproach.

Other people who have transitioned from good friends to acquaintances, often jog my memory by reminding me how small I was ten years ago. I also jog their memory with stories of my two children and how women’s bodies undergo alterations after 35 years. Besides, if all factors were constant and the x- axis of low weight transformed with the y- axis of gorgeousness, they should be riding high in the looks department. Those factors are never constant.

I have more endurance than many people who are 30 kg lighter than I am and this is because I have been exercising for a year now. Combined with juices, consistence and overdoses of spiritual food, I’m well on my way this year to my 20kg weight loss. Thanks to my Super Budz fitness group, Lamwaka, Ibrahim, Twongyeiyerwe, Tabaro, Nsengiyunva, Nakayenga, Grace and a few others who lift me up constantly in this tedious yet fulfilling ride.