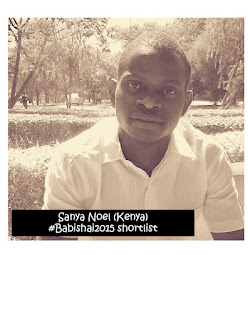 Sanya Noel lives in Nairobi where he works as an Industrial Security Systems Technician. He writes poems (mostly) and short stories, though he sometimes pretends he can do essays. His works have been published in a few spaces here and there, but he rarely gets the time to write nowadays. So he concentrates on doing short random stories and poems about his experiences as he goes around Nairobi. When he isn’t trying to pay his bills(and not writing either), you may find him seated at public parks, most times with a book, definitely alone, at times reading, at times just seated, and of course bothering no one.

A Poem We Would Rather Forget  by Sanya Noel (Kenya)

This is what you wish for                    a chance to forget
that on this day, thirty one years ago
five thousand people were executed
by their own country.

The winner will be announced during the #Babishai2015 festival, 26 to 28 August at The Uganda Museum, Kampala.