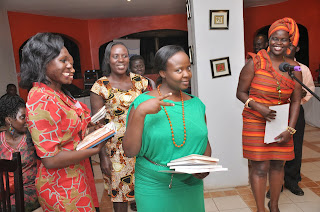 We departed on Wednesday the 18th of September, a relatively warm evening, at around 7pm. Through the slight jam of Kampala roads, to the thicket in Mabira forest we rode. By around 11pm, I still recall, because I had to inform my loved one in Dar es salaam, when I was crossing to Kenya; we got to Busia. At 10 am, we had our first class and after refreshing up and settling in the hotel. We were ready with our pens and papers to attend the first class. The first class I attended was by Kwame Dawes. a gentleman who later on became my friend and a fan of my ever flowing jokes. I must admit it was a humbling session, and the main thing I learnt was we should always know as poets that whatever we write, someone else may have written something similar which indeed makes sense. He gave us various websites and links that host poetry competitions and indeed I will contact him.

There was also a session by Dr. Neal who was talking mainly about poetry and his life, and I must admit it was a deep session. Dr Neal is a black American poet who was always discriminated against because of the color of his skin. He gave me new tips about poetry and I actually found out that I have the same syndrome as him and many other writers. The syndrome of writing at weird hours and in weird places. It was a humbling lesson. I was glad I was there. After that, we had a session by Zukiswa Wanner which was hilarious. She is a South African writer who is currently living in Kenya. Zuki (as she is fondly called) is one of the craziest funniest speakers we had for the sessions. She took us through an exercise of narrating how we want to die. Bizarre and creepy, right? Yeah, but we talked about death. Funny. That ended the day and we went to rest. There was a function later that day but I personally never attended it. I was still tired and the biting cold of Nairobi was getting the better of my bone marrow.

Friday. On Friday, the second day, we woke up to the usual Nairobi coldness and rushed to the museum. The master class by Richard Crompton commenced at 10 am. We were only eight people in the class and all I can say is the class was deep. We analyzed his “friends” story that he had earlier sent us. And also talked about the essay that he had told us to write. It was surely hilarious to know that the first words of a story, the way the words are written can either make a reader captivated or not. After that, there was a session of Short story writing which was sponsored by the Commonwealth Foundation and being the short story writer that I am, I chose that. I found Dilman dila and Alexander Ikwah already at it, and I got all the information I needed from them about how to write my short story. There was also creative writing by Biko Zulu, a Kenyan blogger. I enjoyed the session which was very involving and I met a good writer and blogger who has engaged me ever since I left Kenya. The Biko Zulu blog is the best blog I have read from so far. He is a good story teller. You can almost converse with him all year if you read his blog. He talks about his life with ease and a lot of humor. Later that day, there was a get together at Muthoni’s house. It was a good feeling mixing with poets from all over the world. Once again, the coldness of Nairobi got the better of me, and I was coiled up, warming my bones on the fire all night. I envied the logs that were burning in front of me. At that time I would gladly switch places with them.

Saturday. On the third day, I woke up feeling great. I think it was because later in the day I had a poetry session in which I was reading the poem that led me to even be in that festival that I had never dreamt of attending. So after preparing, taking a sumptuous breakfast. I was in the festival and the first session was by 3 poets. One was a South African old poet Mongane Wally Serote. He was a gentleman that had been in the apartheid struggle. His home is in a town called Alexandria and he wrote a poem about it which he read to us. He read more poems and told us stories of the apartheid revolution. If I wasn’t in a public place, I admit I would have cried. Warsan Shire, a Somali Kenyan who lives in the UK also read her poetry and answered questions and told us her life story. She is a deep woman and her poetry is inspiring. I enjoyed every bit of it. The third poet was Dr. Neal and he talked more about his life and poetry more. Later that day, we had a session with Teju Cole and discussed his book it was a fulfilling session too and very well attended. He was asked about his life and journey in writing. Teju is a Nigerian writer who lives in New York. After that, I attended koroga by Micheal osando. It was a good session too that teaches how to mix poetry and pictures. I learnt a lot of information that I will use for my blog. Ealier that day, we heard that robbers had attacked a mall in Kenya. However we went ahead with the session where we were presenters. East African poets were battling West African poets and we did our best. I read my winning poem, INNOVATION and another poem caledl, HOW MUCH IS TOO MUCH. . Kwame Dawes, Nii Parkes and Fatou Were from West Africa all challenged me, Pamela Orogot, Rashida Namulondo and Clifton Gachagua. It was a good session and we had fun and questions were too many. Even as we read our poetry we knew something was wrong. One of the West African poets we had Kofi Anwoor hadn’t made it for the session. It turned out what we had thought was a robbery was instead a terrorist attack and he had been with his son in the mall that was attacked. He was killed in the mall, but the son survived. We learnt of his death the following day, a Sunday.

After our session, the festival had to close and all Sunday we were in hotel, trying to communicate to friends and family that we were okay. On Monday morning we left Nairobi for Kampala and reached late in the night. All in all, I learnt a lot about poetry and writing. I learnt a lot that I never would have learnt had I not gone to the festival. I will keep going there, not only to learn more but to remember and celebrate the death of our departed brother Kofi Awoonor.