The BNPA team is profiling past winners of the award since 2009. Here is Regina Asinde, who emerged second in 2010. 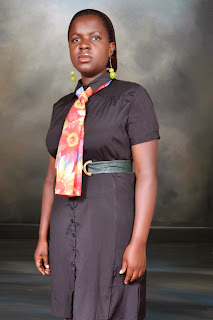 1. What is your name, profession and how would you describe yourself?

My name is Regina Asinde. I am a business lady. I describe myself as mature, candid and a firm believer in integrity. Every day I work to improve myself and my skills—that’s part of becoming better at what I do.

2. What year did you receive the award? What was your position and title of your poem? Mention the theme of the award that year.

I received the award in 2010 and was in the second position with the poem “Fragrance”. The theme for the award that year was Money and Culture.

3. What was the writing process of this poem like?

Surprisingly, “Fragrance” was one of my “brilliant idea-put on paper” poems! When I saw the call for submissions, it was just about three days to deadline. I got thinking that I should submit a poem and even if it would not win, there was really no harm in trying and so I went home and flipped through my draft book that lovingly embraced my poems. I was searching for poems I had written whose overlaying theme was money. To my dismay, I had none even remotely hinting at that theme! So I had to go back to pen and paper and draft out something. It was during the great scandal of Temangalo land and Global Funds. As I heard a couple of neighbors discuss the scandal, wondered what could make one do what the key players in that scandal did and it suddenly hit me that it was nothing else but Money and not just the sight of it but the smell of it. And there I had the poem.

4. How did the award money and the other prizes you received, change your outlook towards writing?

They made me realize that one could actually make a living out of writing in Uganda! Earlier on, I had believed that writing as a profession that earned one an income was only possible in the western world and some other few African countries. But with this, my belief changed and I was inspired into thinking about a career in writing. Unfortunately, I’m yet to realize that dream.

5. What do you think of the BNPA, now targeting Africa and including men?

It is okay, though personally I would have loved to keep it Ugandan and strictly for women. There are so many literary awards open to all Africans and everyone which I believe others can submit their poems to. The average Ugandan woman would feel challenged to submit, particularly the upcoming poets who are not yet so confident in their artistic skills. However, when it is Ugandan only and females only, more women would be encouraged to submit.

6. BNPA is starting a Scholarship Fund for female poets in primary schools in Uganda. How do you think this will influence their poetry?

This is great. It would help them develop and grow artistically from an early age and will give them a chance to learn the necessary skills and training that would make them become better poets as they grow. I love this idea.

7. What are you working on now, artistically?

Right now, I’m writing some nonfiction book and also working on some short stories. Of course I still write poems, they are my punching bag.

Her poem can be read on the website http://bnpoetryaward.co.ug, under, Winning Poems 2010.

Thank you Regina
Posted by Beverley Nambozo Nsengiyunva at 4:44 PM