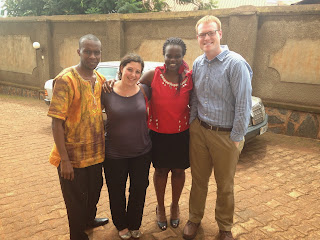 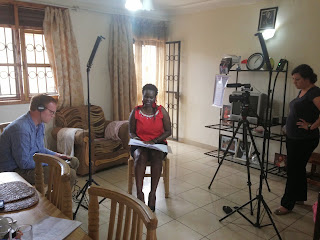 It’s been so noisy and overwhelming the past couple of months. When my eyes couldn’t stay open, my hands felt the way for me and when my feet were so bruised and worn, my instinct trudged on. Even after letting go of so much excess weight in my personal life, I just felt heavier. And then PBS NewsHour called.

I still don’t understand fully why PBS NewsHour came home to interview my family and I. I didn’t know who they were until I asked a few friends and family in America. I still haven’t had time to feel honoured. The 4 hour interview was engaging and fun and I saw a lot about myself that I had never probed to understand. Usually when I sit to lay my plans and map out where I want to go, there are places I pretend I never travelled to and people I pretend never meant much to me even though they did. Even the steps I walked which were insignificant and lacked direction, the people I dismissed and the ones whose words weighed like wet wood.

There has been no time yet to process or feel because instead of living one life, I’m living many lives right now. I’m a mother of two, Coordinator of the BN Poetry Award, wife (very very sexy wife), cook, cleaner, entrepreneur, daughter, sister, friend. I have to smile and be perky when people call and ask if they can still submit poems to the BN Poetry Award, even a week after the dead-line. I have to smile as I politely say No, because the Judges already have the poems. I manage many other Arts projects which pop up in the most unlikely of places. A friend of a friend who recommended me or who read about me in the papers who wants me to teach her fifteen year old son how to write a novel. Or a Manager that does not have any money wants me to write his book and says I will become rich from the sales. There is so much noise. Everyone is shouting at once.

So, PBS came. Victoria and Jason are nothing but charming. I would invite them home for tea or for a movie or just to talk about books. Emma, my husband was dressed and sharp, more eager than I was. Our girls were at their best, especially when Victoria told them to scribble on the walls so that they could capture a normal day at home. I wanted to tell them everything I could about myself, my projects and my parents, how everything changed when I became a mother and that mothers don’t have to stop with their careers and that could even be when their careers began, as it did for me. Nothing significant happened in my career until I had a baby. And when I become a grandmother, I know that more will happen.

As soon as the PBS crew drove in, I was immediately at ease. There was no need to feel guilty about not buying new curtains or furniture for the huge media house. The interview began almost at once.

I started the poetry award because I knew there was so much more to life than being in an office. And when my daughter turned 4 months and I quit my job to be at home with her, I knew that I was going to pursue poets and poetry until I became breathless. I’ve been doing so for six years now. Every year I feel like giving up because fundraising for poetry projects is one of the most difficult things I’ve ever had to do, that and labour pain. Each year though, things happen and more things happen. I’ve met some of the most magnificent friends I could have ever hoped for in a life-time in the past few years. There are people who are celebrated at such wide international scales but whose humility in reaching to me, makes me feel like the most blest person in the Universe. There are some who I always want to boast about, the kind of boasting where I want the world to know that I have visited and inhabited true friendship, the type that is mashed up until the colours blend into one. The type of friendship where it doesn’t need to be publicized because the evidence of its power is evident in the privacy of contentment. Friendships that grow every time they are shared selflessly. Have you made that friend? Whichever way certain friendships may go, I will know that because I did the right thing with my life, I have held one of life’s most potent gifts, friendship.

I thank poetry for that. Thank you, Poetry. Thank you, Poetry for PBS NewsHour and for journalists and development partners and people who sit and trust that I am the woman for the job. Thanks Poetry, for the Ambassadorial role in being the BBC Commonwealth Poet from Uganda.

I have been spending lots of time with positive thinkers who were part of my first writing days, people whose journeys have spread so far that when we sit and talk, it’s not so much about what could have been but more about, Where we are is so much better than we could have ever dreamed!

Interviews like PBS that use the keen eyes of the heart, mind and intellect are good for us to see into ourselves. They helped me see how I actually do care a lot about women and girls and love to travel as often as I can. They helped me see myself through stunning eyes, instead of eyes that are judgemental and bigoted.

I am learning that it’s okay to feel sexy and brave and hot when others are stifling in luke-warmness. Sometimes the best help I can give a flailing friend is not to step back and reach for them but to show them the way by walking at my fullest height.