The Babishai Niwe Poetry Foundation launches its pilot online mentorship scheme, which will run from November 2015 to May 2016. This first of its quest, this program is part of the #Babishaipoetry  annual prize, awarded to the shortlisted poets, who are some of the most highly imaginative, exceptionally talented and unswerving poets. This mentorship scheme in a sense, will enable them to foster a professional writing relationship with dedicated mentors to African poetry, nurturing their craft and building their confidence as performers. Some poets on the program are also winners from previous years. Amongst our mentors, whom we are most privileged to have are:-


Nick Makoha represented Uganda at Poetry Parnassus as part of the Cultural Olympiad held in London. A former Writer in Residence for Newham Libraries, his 1-man-Show My Father & Other Superheroes debuted to sold-out performances at 2013 London Literature Festival and is currently on tour. He has been a panelist at both the inaugural Being A Man Festival (Fatherhood: Past, Present & Future) and Women Of The World Festival (Bringing Up Boys). In 2005 award-winning publisher Flippedeye launched its pamphlet series with his debut The Lost Collection of an Invisible Man. Part of his soon to be published 1st full collection The Second Republic is in the anthology Seven New Generation African Poets (Slapering Hol Press). Nick was a joint winner of the 2015 Brunel African Poetry prize and has poems that appear in the TriQuarterly Review and Boston Review and emerged third in the #Babishai2015 Poetry Award.

Kwame Dawes
Ghanaian-born Jamaican poet, Kwame Dawes is the award-winning author of sixteen books of poetry (most recently, Wheels, 2011) and numerous books of fiction, non-fiction, criticism and drama. He is the Glenna Luschei Editor of Prairie Schooner, and a Chancellor’s Professor of English at the University of Nebraska.   Kwame Dawes also teaches in the Pacific MFA Writing program.  Dawes’ book, Duppy Conqueror: New and Selected Poems was published by Copper Canyon in 2013.Kwame is also the founder of the African Poetry Book Fund and African Poetry Book Series.

Stephen Derwent Partington.
Poetry is his primary hobby and passion. He began to write poetry at school. He describes his poetry as accessible. His early writing was full of Modernist allusions and foreign languages, but as he accessed more contemporary poetry this disappeared.
He’d probably also describe it as hybrid in the sense that while he has sought to fit into the Kenyan (and wider African) traditions of broadly Anglophone verse, lots of influences from his pre-Kenya days remain. He has been published widely in various anthologies and also,
published in; . Two collections, one in Kenya (SMS and Face to Face) and one from the UK (How to Euthanise a Cactus). 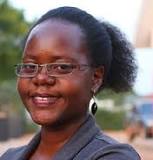 Harriet Anena is a Ugandan author, poet, and journalist. She is the author of a collection of poems, "A Nation In Labour" and currently works at African Centre for Media Excellence. Anena worked with the Daily Monitor newspaper as a reporter, sub-editor and deputy chief sub-editor from 2009 to September 2014. Her journalistic articles have been published in the Daily Monitor, New Vision and The Observer (Uganda). She has previously taught Specialized Writing at Islamic University In Uganda. (courtesy photo

Sopelekae Maithufi (courtesy photo)
Associate Professor in the Department  of English Studies, University of South Africa. He generally researches how people in liminal positions discursively perform context-specific identities. This is an interest that he pursued with considerable earnestness subsequent to his MA degree candidacy in Postcolonial Literary Studies in English at the University of Natal, Pietermaritzburg. His PhD (Wits, 2009) explored the suitability of Njabulo Ndebele's cultural studies model, the ‘ordinary’, to the representations of textures of everyday life in several South African short story writers. It reveals Maithufi's continued keenness in the novel ways in which subjects appropriate positions of authority beyond antinomian lines. As somebody who teaches mostly African literatures, literary and cultural studies theories from across the world, Maithufi attempts to highlight dynamic interplays between primary texts and theoretical frameworks.

Aderemi Raji-Oyelade, popularly known as Remi Raji, Nigerian poet, scholar, literary organiser, and cultural activist. He graduated with a B.A. Hons degree, Second Class Upper, in English from the University of Ibadan in 1984. He got his Master’s degree in Literature in 1986 and his doctorate degree in African American and African literatures in 1994 from the same university.Professor Raji-Oyelade has published a number of books and essays in African, African American and Caribbean literatures, literary theory, contemporary Nigerian poetry, cultural studies and creative writing. A visiting professor and writer to a number of institutions including Southern Illinois University at Edwardsville, Universities of California at Riverside and Irvine, University of Cape Town, South Africa, Stockholm University, Sweden, and Cambridge University, UK, his scholarly essays have appeared in journals including Research in African Literatures and African Literature Today. He is the author of six collections of poetry including A harvest of laughters (1997) which has won national and international recognition, Webs of Remembrance (2001), Shuttlesongs America: A Poetic Guided Tour (2003), Lovesong for My Wasteland (2005), Gather My Blood Rivers of Song (2009), and Sea of my mind (2013).In December 2011, he was elected as the President of the Association of Nigerian Authors, the largest umbrella body of writers in any African country. He served for two terms. Remi also serves on the board of the Babishai Niwe Poetry Foundation.

We intend to host the mentors and their poets at the #Babishai2016 Poetry Festival, which runs from 24 to 26 August 2016 in Kampala under the theme of Abundance: Poetry From Contemporary Africa.
The poets on the pilot scheme are:-