Every week, we publish interviews of the guests for the #Babishai2016 Poetry Festival, scheduled from 24 to 26 August in Kampala. Here’s Graham Mort, Professor of Transcultural Literature at Lancaster University , author of more than nine volumes of poetry and who can’t wait to return to Uganda.

1.      You have nine volumes of poetry to your name. Were there significant changes in your poetry after the first three volumes?
Well, I think it’s been more a process of evolution rather than rapid change. The first three collections explored some of the things I was most interested in – landscape and places, politics, violence, conflict, work, forms of social injustice. I think that my poems became more complicated after that period, so I’d try to build more themes into the same poem. I don’t like poems that preach, so my other preoccupation was trying to make poems that got people to think, but didn’t tell them what to think. So for me the personal and the political have always worked together, often with the underpinning of a very distinct location. The more I’ve travelled, the older I’ve become, the more those locations have opened out new dimensions in the poems.But one constant has been writing about birds in both my poems and my prose. One of my richest experiences of Africa was visiting lake Mburo in Western Uganda – the birdlife there is amazing and I found that very affecting. But even in Kampala there are birds everywhere, the most I’ve seen in any city in the world. So they’re a constant thread through my work that’s been there from the beginning, though they’re never really just about themselves. I guess they’re emblems of flight, freedom, the ability to soar above everything and look down in a predatory way, like writers. 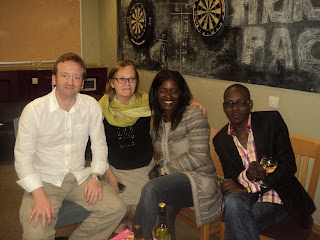 2.      Last year you visited Vietnam to talk about poetry. Briefly describe the objectives and outcome of that visit.
This was a visit I made to the Asia Pacific Poetry Festival in Hanoi. It was large event mounted by the Vietnam Writers’ Association that brought together about 100 poets from all over the world – many from current or former communist bloc countries such as Cuba, Poland, Czechoslovakia, China, and Russia. But also from Indonesia, the US and – of course, me from the UK.  Like many people of my generation, I grew up with the Vietnam War raging on the news media, so that was a formative time in terms of our political beliefs and affiliations. It was very moving to see this beautiful country, still in recovery, and to meet such a graceful people who had managed to defeat the military might of the US through sheer persistence and self-belief. It was also very moving to meet American veterans who had fought in Vietnam through conscription, but had found the courage to go back there and meet Vietnamese writers, who have since befriended them.  The aim of the festival was to create insight into Vietnamese culture and poetry and it certainly did that in a powerful and long-lasting way.

3.      In 2002 and 2003 when you launched the Crossing Boarders Writing Mentorship scheme in Sub-Saharan Africa. What were the major changes you saw in writing amongst the writers of the program?

I’d been writer–in-residence at Makerere University for the British Council in 2001 and I fell for Uganda and its people almost from the moment I stepped from the plane. There I was in Uganda for the first time with no one to meet me, this shy Englishman, yet it was just extraordinary. During my visit I met many young writers whose work was influenced by rather archaic models of poetry and, at that time, there were virtually no Ugandan writers on the school curriculum. So it felt as if writers working in English had a very outdated sense of contemporary writing in English. When I built a team of mentors in the UK, I wanted to find professionals writers who also represented the cultural diversity of the UK. When they came together with young Ugandan writers – and later with those across sub-Saharan Africa – I think there was a recognition that we were working together in a common purpose of cultural exchange and writing development, not in a hierarchical relationship as teachers and students. In fact, we were very were keen to avoid that perception. Uganda was conspicuous because of the way that young writers gained confidence in their work and in their own voices. They began to publish their writing and to win significant literary prizes. But this wasn’t just one-way traffic, the writers who worked as mentors from the UK all visited African countries and that had a profound affect on many of them.

4.      Your session at the #Babishai2016 Poetry Festival is called Working with Words. Who is your target and what can participants expect?
I haven’t worked out the fine details of my workshop yet, but I want to get down to the idea that the work of poets is to build poems in the way an engineer builds a complicated structure, or the way a composer harmonises a piece of music but includes dissonant elements. It’s important to understand the nature of the materials we’re using: the extraordinary energy and potential of language, the interrelatedness and inherent ambiguity of words. The American poet, Robert Lowell said that a poem doesn’t just describe an event: it is an event. By that he meant it was an event brought about by language that happens in the realm of language. The ability to speak about how we think, feel and experience the world is uniquely human, it expresses our individuality and difference, but also the solidarity that takes place between humans when we communicate. I’m hoping to provide a workshop for anyone interested in the ability of language to describe this world whilst inventing other ones. Oh, and I should say that a sense of humour will be essential!

5.      Why was it important for you to accept our invitation?
When I first came to Uganda in 2001 I was received with warmth and generosity by everyone I met. In a way this helped me to understand things about myself – a middle-aged writer from the northwest of England caught in the vortex of a Ugandan general election, with all the tensions of that time sparking around me. I even played cricket at Lugogo stadium for a local team. So here I was, out of my comfort zone, but I was also thinking about home and writing about it, making connections. I’ve been an educator all my life, so it was natural to want to set up a new project,to respond to thetrust and generosity I’d received in some way. That’s why I started Crossing Borders and then the Radiophonics project that led to the Under the Sun broadcasts by Ugandan and Nigerian writers. But I have a much more selfish reasons, which is that I love being in Uganda and miss it when I’ve been away too long! I’ve been back to work with the women writers at FEMRITE – who were instrumental in opening up the writing scene in Kampala for me when Goretti Kyomuhendo was in charge. Kampala is a rapidly changing city and that includes its literary life. I was really honoured to be asked onto the Babishai Niwe board and then to be invited to the festival. I want to see what’s going on now, in 2016 – and, of course, to meet up with some old friends. I’m going to stay at the Guest House at Makerere, drink a Bell lager or two, and tune into the political discussions on the terrace as the city lights up at night.

6.      What are the two main subjects you find yourself constantly writing about?
That’s a really tricky question when it comes to poetry.  It seems an obvious question but writers nearly always take evasive action when they’re asked what their poems are about, because poems are always reaching beyond language to the ineffable. I suppose ‘love’ is an obvious answer to that, the way it endures and is redefined as one gets older. Louis Armstrong said that without love a musician couldn’t play. But that kind of love is not just for another individual, it’s the sense of importance we attach to life and the vitality of language. The other constant dimension for me is definitely that sense of exploring location: not just the present moment of a place, but history and future, too. I guess writing about places also involves the feeling of being out of place. Maybe that’s how we understand ourselves best, when we’re taken out of our natural element and have to try to breathe somewhere else. It’s also a tricky question, because poems themselves try to evade obvious subject matter or to subvert it. Back to Robert Lowell. It's not so much that a poem is about its subject, it is its subject. Each poem is really complex and individual: we don’t say that people are about themselves; they are themselves.

7.      How do you feel towards art for social change?
It’s one of the main reasons that I return to Africa and why I’ve been working in Kurdistan recently. African writers, in particular, have always seemed to believe that writing can redress social and political injustice. It’s no coincidence that some of the towering moral figures in Africa are writers rather than politicians. I think writers also know that you have to forgive in order to understand, in order to create a poem or a narrative that is more than a judgment, that can synthesise a new vision for the future. I think Nelson Mandela was a great politician because he understood that kind of forgiveness and reconciliation. In my own work – especially in prose fiction – this is something that I’ve explored, the way we need to confront injustice, but can’t merely judge. Injustice is its own judgment when exposed. My last book of stories, Terroir, is largely concerned with forms of violence against the individual. It’s true of some of my poems, too, but poems also need to celebrate life in a positive way. Sometime it feels that I permit myself those more joyful events, those glimpses of irony, humour and beauty, the ways that poems remake experience and show us things just beyond our understanding.So social change, realisation, insight, can be brought about in many ways, including – or especially - by an artist being true to themselves rather than to a political agenda. That takes me back to those bird poems and how mysterious, miraculous and moving things we almost take for granted can be when they’re remade through words.

We look forward to hosting you. Any concluding remarks?
Just that I’m so much looking forward to coming back. When I step off the plane I’ll catch that incredible scent in the air, the sense of tumult and excitement that is Entebbe, Kampala, Uganda.Then black kites and marabou storks soaring above as we drive towards the city centre.There are lots of memories in Uganda for me, so there’s always a little sadness, something a little wistful about going back to a place that has been important in one’s past. I’ll be thinking about homeand writing, bridging that space between continents with words. Then, after the festival, I’llbe flying to Johannesburg where I have work to do and some more old friends to meet up with!

In partnership with Praxis Magazine, we’ll be publishing weekly interviews of the guests for the #Babishai2016 Poetry festival.
Email: festival@babishainiwe.com
Tel: +256 751 703226