Oprah Oyugi won the #BabishaiSZ Twitter competition run by Storyzetu in Nairobi. Her prize is a fully paid trip to the #Babishai2016 Poetry Festival, 24-26 August in Kampala. We're grateful to Praxis Magazine for publishing these interviews. 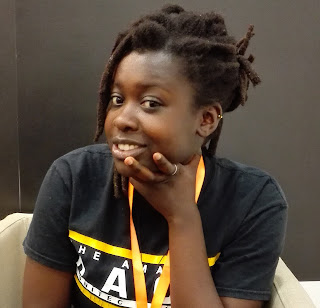 1.       Oprah, we know you’re a film-maker and a writer. Which role came first?
I  knew I wanted to pursue filmmaking a few months out of high school and didn’t think about writing as a career till after I had finished my film course. However, I have written and have been writing since I was 7.
2.       In February, Storyzetu ran a one-month long Twitter competition for residents of Nairobi, which you won and now will be attending the #Babishai2016 Poetry Festival.  What do you expect from a poetry festival?
Outrageously amazing poetry and poets

3.       What is the most remarkable deed you have done as a film-maker?
I’m only starting out and don’t feel like I’ve quite earned my stamp as one. But I’ve been selfish of my life and been very clear that I will follow Filmmaking and writing as a career in Kenya and Africa, no matter what… I hope many Kenyans and Africans can and will do the same. We have amazing stories hidden in our people. These are the stories that will liberate us from neo-colonialism and make us look inwards, love ourselves and grow. If I have inspired a fellow Kenyan/ African to do the same, I hope that can count as a good deed.
4.       Can you name some of your favourite African film-makers and why?
My favourite African films were directed by foreigners. We have to change this. Still, these guys stood out to me and I don’t think it’s coincidence most of them happen to be Writers/Directors

●        Tosh Gitonga – Nairobi Half Life. If you haven’t watched it, you must. It’s pretty self explanatory.
●        Lupita Nyong’o – I believe that she is where she is today because of her hard work, tenacity, relentlessness and determination. I reckon that’s what makes or breaks filmmakers. These are traits I’m working on having.
●        Donald Mugisha – The Boda Boda Thieves. I loved this film.
●        Yared Zeleke – Lamb : The heart, simplicity and empathy of this story just got me. I walked out of the cinema with a fire to make films after watching this one
●        Gared Hood – Tsotsi : This was such a raw and gritty film that was so true to the setting and experience of many African slums. I could see and hear the people of Dandora, Kibera and Githurai  in this film.
●      Abderrahmane Sissako  – Timbuktu. This one just shut me up. The film is paced in a way that makes you take in every action or inaction. The diverse cultures represented in the film are done in such truth and honesty. My films will definitely be influenced by his work.

5.       Are you doing what you dreamt of as a child?
Well, there’s 2 answers that question. Always wanted to be a pilot – still have my sights on it. But since I was very young, I’ve always made things up in my mind and written. I was always that girl who had her composition read at the front of the class. My mom really wanted to publish them. I wouldn’t say I dreamt of it but I was a dreamer. I guess, some things just manifest. Go figure
6.       The Babishai Poetry festival theme is Abundance: Poetry from Contemporary Africa. What do you think this means?
Surplus, availability or lack thereof of what we as humans (Africans) want, need and desire.

7.       What is the best diet for poets, in your opinion?
Shitloads of stories, poems (reading material basically), an observant mind, an unquenchable desire to understand the actions of others and an environment bustling with human activity.

9.       Any parting remarks? No
Bio
Oprah is an upcoming filmmaker based in Nairobi, Kenya. She studied Creative Writing in Whitireia NZ and hopes to write stories and films that depict and look into the true lives of Kenyans and Africans. Her Short Play went through to the Wildcard finals in the Short + Sweet Festival in Sydney. She hopes to premiere one of her short films based on gangs in Kenyan universities in June this year.
Read more about her and check out her work on: www.oprahoyugi.com