LANTERN MEET OF POETS WARMED US ON SATURDAY 9TH APRIL 2016

Lantern Meet of Poets performed on Saturday 9th April, to what is arguably their best performance to-date. Poetry Will Warm Us, presented before the brimming audience at Uganda’s National Theatre, the show was spectacular, well coordinated and well thematised.


Carefully scripted poems by well-known poets like Surumani Manzi, Jason Ntaro, Guy Mambo, Elijag Wojji, Bagenda Remmy, Lillian Aujo, who won the 2009 BN Poetry Award and many others, were articulated with outstanding spoken word performances from an enthusiastic and talented cast. Poetry Will Warm Us was heart-warming and offered a reprieve from the familiar tones of anger, betrayal and mistrust towards political leadership and systems. The multi-facetedness of love has obviously not been exhausted.  Lantern Meet of Poets used three acts with various scenes where heterosexual couples vocalized their sexual lust in the most bizarre and wildly creative ways.

With lines like, “Your silence is musical,” the production was a reminder that love has a million languages which  everyone can understand. The male characters, clad in black, used every overt gesture and description to flatter and pursue different ladies of their choice, the latter in white dresses and suits, each costume representing a single temperament, thought and feeling. Some men were fortunate enough to spend illicit time with the women but while the plot unfolded, their happiness was mostly short-lived, ending in a frustration that everyone in the audience knew only too well, with unrequited love. The background, set in a simple floral garden provided the simple setting for the theme. The tempo was earnest with incidences of dramatic duals for women, earnest desperation and neediness and plenty of humour. It was so frolicsome and yet believable, which only a performance with good direction can achieve. The entire cast moved as a single unit from one scene to the next, capitalizing on each strength. Surumani Manzi, one of Uganda’s most under-rated poets, burnished with several of his poems, carefully selected for the show, alongside his unforgettable performance. His use of the Shakespearean iambic pentameter style for one particular poem was impressive and while it’s encouraged to create one’s own style, one can appreciate that he is widely read.

The potency of the show was in the well-thematised structure, simple stage and costume, tightly woven stage direction and a time of 90 minutes, all of which were sufficient for the multiple ways to express passion, lust and unrequited love.

Lantern Meet of Poets is a brand. This show has the qualities to travel Africa. Audiences look forward to seeing them at the Babishai poetry Festival, from 24-26 August in Kampala, at the Storymoja Festival in Nairobi, at the Aké Festival in Nigeria and beyond. The show can be understood and enjoyed by all audiences and it would be Uganda’s privilege to experience Lantern Meet outside the National Theatre. With a young leadership whose faith in theatre and poetry is refreshing, it’s time for them to reach further.

For details of the Babishai Poetry Festival and our two 2016 poetry competitions, visit us at www.babishiniwe.com or on twitter @BNPoetryAward. 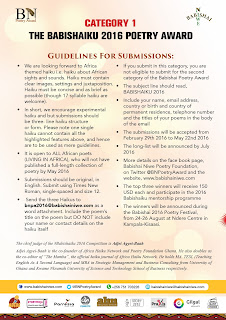 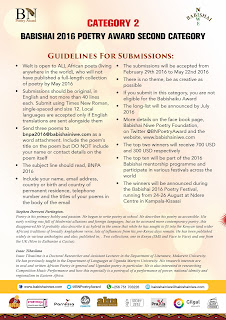