Kuadegbeku Pamela Angela is from Ghana, committed to literary causes and her radar is out for literary landmarks. She pursues writing as a stable career in future. She says that if her haiku were food, it would be fufu and lightsoup. Read more about this enchanting poet.

What drew you to enter for the competition?
I am a keen reader in my own comfort zone and a committed fellow to any literary cause; someone who has since been on a persistent look out for a competition of this nature to rub shoulders with other literary 'landmarks'. I should say this contest is right  in defining my start point in pursuing a more stable writing adventure in the near future. I did have this conviction this contest will carve out a humble spot for me among my peers, and this was entirely the ruling interest that drew me to the competition.

Do you have a particular personal story with haikus?

Personal story? Not precisely please. But I have come close to seeing the practise of haiku as one expressway to encasing all I have read extensively about as an African girl and an aspiring writer so to speak. However, Basho's haiku have practically left an indelible smirch on me since I have read a great deal in my pursuit of learning how to write one myself.

What do you feel towards the shortlist in general?

The shortlist unequivocally displays myriad of intellect, with all the Ku showing in their capacities the expected aha moments. It has predictably led to another insightful finding that many African poets have the necessary creative skills in their tanks to compete with the international haiku poets. How ever, as an upcoming feminist, I am someway displeased a lot of female poets have failed to find the spotlight in haiku. This is where the gender literary match is leaving absolutely a lot of our women counterparts behind. Hope they wake to the consciousness come another contest season. But am glad to be in the same run-lane with some big whips so far.

What motivation do poets need, to keep writing, in this ridiculously competitive world that vies for their attention?

It's really true the dynamics and the interplays have changed unexpectedly in the writing world. Tons and tons of literary materials are day in day out produced beyond the reading population's interest. This phenomenon is sure creating a watertight situation that holds writers at contest end to earnestly keep looking for footholds in their respective continents. This is where this quizzical question stands worth brainstorming over. For me,  it is imperative we produce literary materials that are in close correspondence with our continental demands. Our folkloric stories could be exploited and mutated into readable poems while we also focus some attention on those unforgiving problems that militate against us, giving all to originality. It should be a kind of revival campaign by all to write personally not for the mere fun but for the purpose of writing for the recreation of different reading audience for this century and beyond. I wholly believe the internet dormain can also inject some positive Adrenalines into the whole cause.Thus, the social media pages could help disseminate the brand-new poems we produce. Maybe our devotion to writing haiku could project us also into the circles of success.  What we essentially need now is some regionally based literary groups which can keep whetting the mindset of young poets to write for our print and the audio-visual media as well. These written poems must be solution finding containers than problem detecting ones. It's been too long a habit of diagnosing the pain through our writings, let's prescribe some near- good solutions now.

We at Babishai, congratulate her again. The winners will be announced at the #Babishai2017 Poetry Festival dinner on Sunday 6 August at Humura Resort, Kitante Close. Cards are on sale at 40,000/- Call +256 703147862. The full festival programme is here. 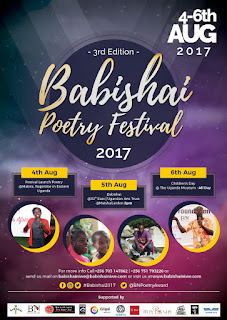