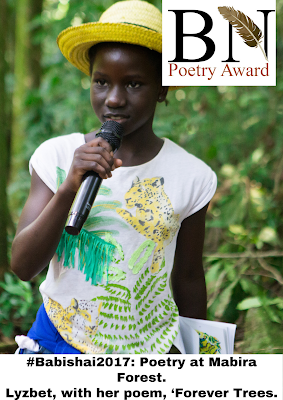 A half-bitten mango, still wet, from the saliva of a monkey, lies on the ground. A half-eaten fig, with particles of dust and stones sticking to it, lies on the ground. Interdependence. Kindness. Lessons from monkeys. In 2017, The Babishai Niwe Poetry Foundation organized its second poetry-nature trip. This particular adventure, titled, ‘Poetry at Mabira Forest,’ opened an entirely new understanding of how social economies are built. The forest walk guide, Hussein emptied himself heaps of knowledge about medicinal trees, Musamya River, and the marvel of the 306 sq km, covered by Uganda’s largest tropical rain forest. 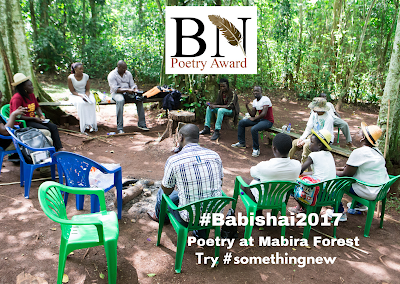 Safari ants, Hussein duly warned, were a constant menace, and he advised extra caution. There were about twenty poets, academics, journalists and well-wishers in total, who set off on Friday 4 August, from Kampala City, for the launch of the #Babishai2017 Poetry Festival at Mabira Forest. Situated in Najjembe in Buikwe District, Eastern Uganda, between Lugazi and Jinja, the forest boasts of 312 types of trees, and 315 bird species. Covered by such a green density, the forest, for some parts, blocked out the sky and was replaced by an eerie yet welcoming canopy of leaves. There are tropical trees standing at heights of 197 feet, with buttress roots, and one remarkably powerful tree was the Prunus Africana, known to have the medicinal ability to heal prostate cancer and malaria. How empowering to know of the healing nature of trees, and to be honoured with such vastness of miracles. Why then would we intentionally destroy it? Are we oblivious to nature’s healing influence? Mabira Forest’s unmistakable clout continues towards the Musamya River. 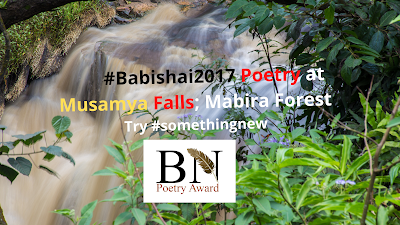 Musamya River flows earnestly in the Western and Northern part of the forest, joining Sezibwa Falls, and eventually flowing into the River Nile. Musamya Falls, also named Griffin Falls, is a major site, which unfortunately has been partly ruined by the continued burning of sugarcane and dumping of waste, in the surrounding areas. Apart from promoting poetry, and performing witty and unconventional verse, across Uganda’s breathtaking landscapes, the Babishai poetry-nature series is intent on promoting environmental conservation. This trip identified several areas that were disconcerting, and that hopefully would alert all Ugandans and stakeholders as gatekeepers and stewards of the environment that we have been lavished with. The environment includes both the flora and the fauna. These include the often misunderstood nature of the monkeys.

A half-bitten mango, still wet, from the saliva of a monkey, lies on the ground. A half-eaten fig, with particles of dust and stones sticking to it, lies on the ground. Interdependence. Kindness. Lessons from monkeys. These primates leave the forest bed littered with half eaten fruit; for the sole purpose of ensuring that there is food for other animals that mostly crawl or scamper on the ground. Amongst these that benefit from the fruit, are millipedes, snails, squirrels and porcupines.

Having first taken a tour of Mabira Forest myself, in 2005, during the heavy protests over the deforestation of large parts, for sugarcane planting, I was enamoured then just as I was enamoured eleven years later. With the notes taken by the poets who travelled and the footage sponsored by the Babishai team, I was able to capture the essence again.

As a risk-taker, with a fascination for heights, Hussein who also managed my zip lining expedition, explained about the thrill of the one-hour adrenaline-pumping ride. Cruising over, while hanging on for dear life, is as daunting as it is exhilarating. There are six zip lining ‘flight’, in total, the last covering 87 metres across River Musamya, leading to the final descent. Some more avant-garde couples, decide to ride together, leaving onlookers in awe.

The Babishai 2017 Mabira Forest nature trip, was, all in all, a once-in-a-lifetime delight, with the promise of subsequent poetry excursions across Uganda.